Magically suspended between the blue sky and the iridescent colored sea, the Amalfi coast seems to be born from the palette of a painter who wanted to use the warmer color gradients for creating a landscape that enchants the visitor at the first shot, giving thrilling experience and such evocative view to doubt, for a moment, it is real. It is the land where the sweet scent of lemon blossoms harmonizes itself with the most aromatic one of the Mediterranean vegetation and the acrid aroma of saltiness; where the brilliant colors of the majolica domes, bougainvillea and carnations pergolas give an evident colored touch to the typical whitewashed houses, clinging to the last offshoots of the Lattari Mounts that plunge dramatically into the sea.

A vertical landscape, in short, characterized by a picturesque labyrinth of stairways and narrow alleys, connecting the two main elements of this landscape: the mountains and the sea. A continuous succession of headlands and inlets, bays and fjords, interspersed with pebbled beaches and rocks on which you can still see the ancient viceregal towers, the first bulwark of the local population against the Saracen attacks. The shift from the sea to mountain is seamless: the mountain sides were terraced over the centuries, shaped by human labor to create flaps of arable land and already compared, during the Renaissance period, to the legendary Hesperides by the Italian writer and naturalist Giambattista Della Porta.

All the towns of the Amalfi coast are connected by the scenic SS. 163 road, built in the first half of the XIX century during the Bourbon period and always considered one of the most beautiful road in Italy. Following the natural course of the coastline, the route is full of curves, nestled between the rock and the sea cliffs, giving new and spectacular shots at the exit of every tunnel or hairpin bend. Before the construction of the coastal road, locals reached all the towns via mule tracks and footpaths, still existing and particularly appreciated by trekking lovers for the stunning views that can be enjoyed. 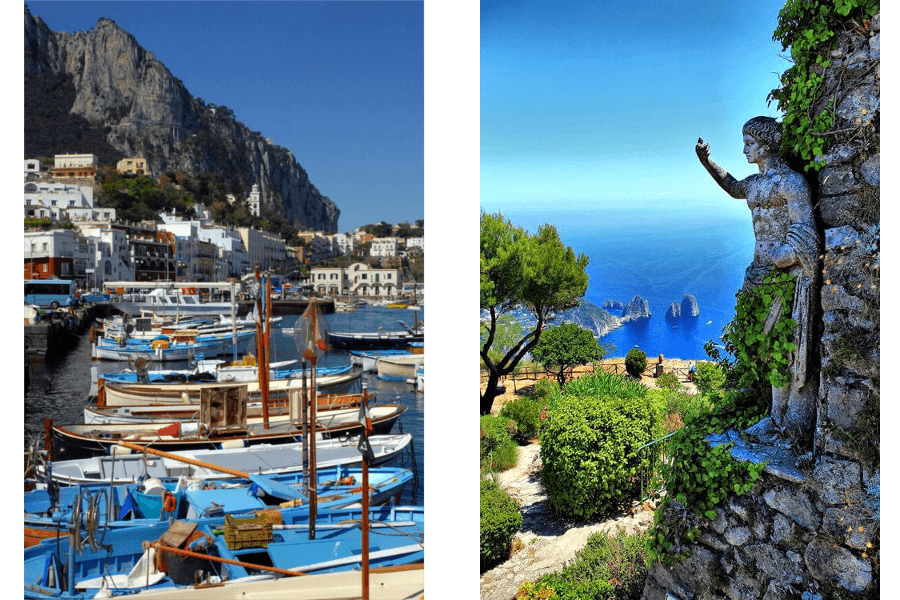 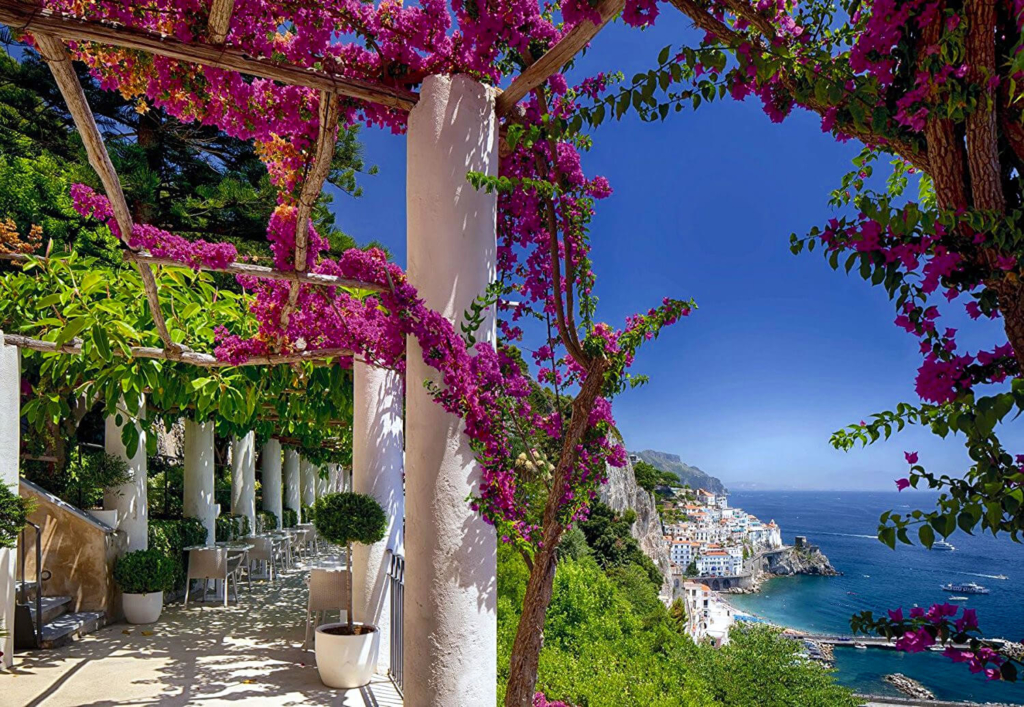 Amalfi, the town that gives its name to the coast, is situated at the mouth of the Valle dei Mulini; it was the first of the Four Maritime Republics of Italy and for a long time had the monopoly of trade with the East. It looks like a cluster of white houses clinging to the rock and connected to each other by covered alleys and stairways. At the center of the main square there is the beautiful Cathedral of St. Andrew, with its impressive staircase, the bell-tower in Arab-Norman style and the charming Cloister of Paradise. The Handmade paper Museum and the Ancients Arsenals of the Republic also worth a visit.

Atrani, a beautiful and charming town situated at the mouth of the Valle del Dragone, is a natural amphitheater on the sea, offering the visitor picturesque views as well as the pleasure to spend relaxing moments in the main square, away from the mass tourism and very close to the beach. During the period of the ancient Maritime Republic of Amalfi, in the valuable Church of San Salvatore de’ Birecto (X century) took place the official investiture of the Doges.

Cetara, a fishing village gathered around the main church dedicated to St. Peter, is an active fishing port specializing in the processing and storage of tuna and anchovy, creating culinary specialties (such as, the anchovy sauce).

Conca dei Marini, a coastal village with a centuries-old maritime tradition, is a natural balcony overlooking the sea, surrounded by the Mediterranean vegetation and terraced gardens planted with “Sfusato Amalfitano” lemon groves. According to tradition, in the Monastery of Santa Rosa, clinging to the steep slopes of a rocky outcrop, was prepared the first sfogliatella Santa Rosa.

Furore, also known as “the town that doesn’t exist”, for its urban layout characterized by scattered villages surrounded by terraced vineyards. It is also called “the painted village”, for the beautiful “en plain air” murals realized on the typical whitewashed houses. Furore is, first of all, the town of the fjord, carved over the centuries by the river Schiato and where every first Sunday of July takes place the MarMeeting – High Diving World Championship.

Maiori, the ancient Reghinna Major, became the favourite setting of the Italian neo-realist director Roberto Rossellini after the Second World War. The wide promenade is bordered by the Norman Tower, on the East side, the marina and the charming Miramare Castle on the West side. In the old town centre beautiful Neoclassical buildings coexist with ancient vaulted houses, representing the first settlement of the coastal town, built around the medieval fortress of Thoro-plano. Also interesting is the medieval Abbey of Santa Maria de Olearia, along the SS. 163 “Amalfitana”

Minori, the ancient Reghinna Minor, has a long tradition in the production of handmade pasta as well as in the processing of the famous Amalfi coast lemon PGI. Surrounded by lush terraced gardens, the small town of the Divine coast hides architectural treasures of great value, such as the ruins of the Roman villa (I century AD), the Basilica of Santa Trofimena and the bell-tower of Annunziata in Arab-Norman style. 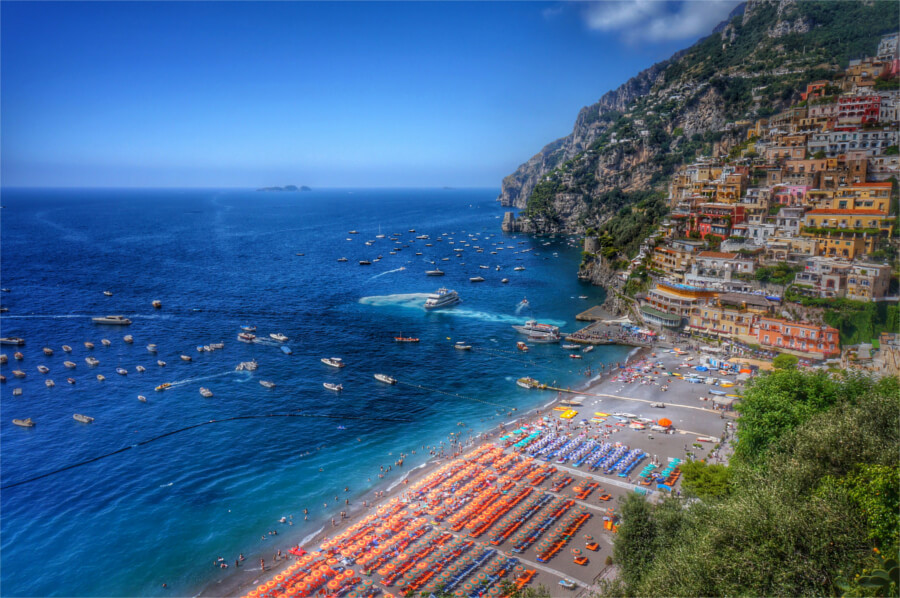 Positano is one of the best known places of the Amalfi coast for its picturesque staircases, whitewashed houses following the natural course of the mountain and creating a vertical landscape. 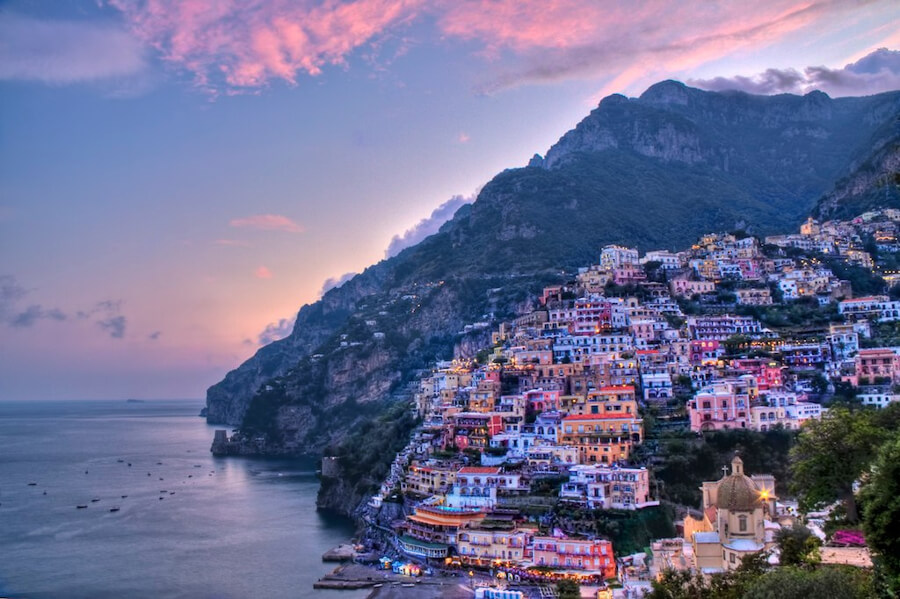 Appreciated by International artists after the First World War, Positano is famous for its handmade leather sandals and cotton/linen clothes (the so called “Moda Positano”), for its beautiful XIX-XX century buildings in Mediterranean style and its postcard landscapes with the background of the tiled dome of the main church and Li Galli islands.

Praiano, with its genuine and authentic atmosphere, far away from the mass tourism, is characterized by narrow streets making their way through the Mediterranean vegetation, terraced gardens and typical houses, leading directly to the sea. Here you can enjoy the most romantic sunset of the whole coast: the purple sun slowly disappears behind the mountains, illuminating in the background Capri with its Faraglioni, the Sorrento Peninsula and Punta Campanella.

Ravello, already praised by the Italian poet Boccaccio in his Decameron, with its postcard landscape and noble atmosphere that was a source of inspiration for Richard Wagner who imagined the magical gardens of Klingsor admiring Villa Rufolo gardens. Buen retiro for artists, it houses one of the oldest music festival in Italy, the Ravello Festival, which offers a new main theme every years, embracing all artistic disciplines. 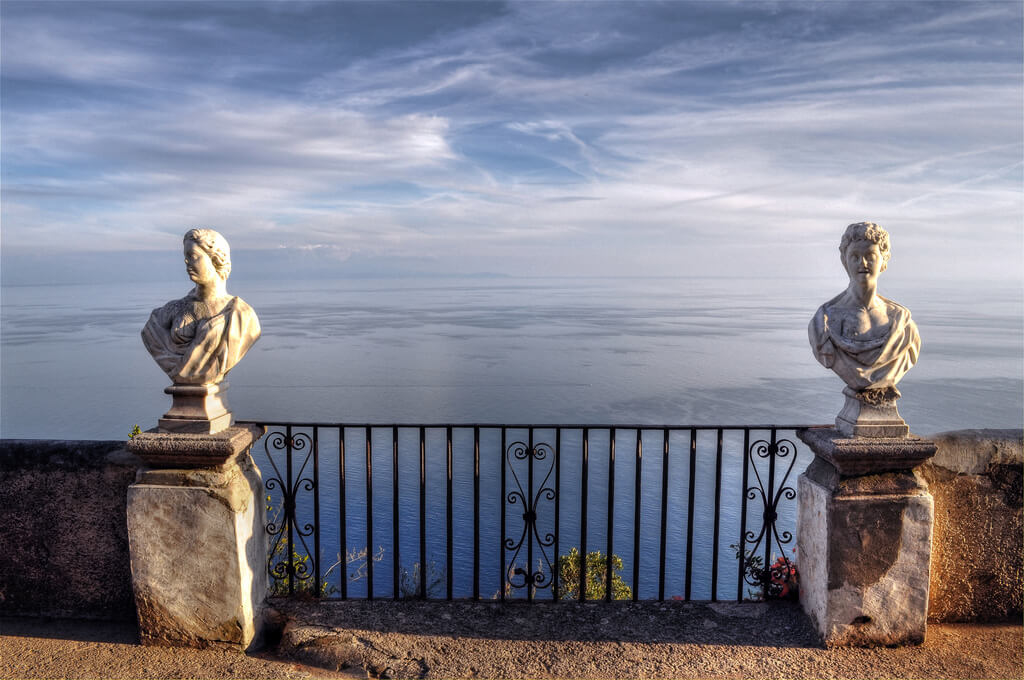 In addition to religious buildings, many of which dating from the Medieval period, ancient palaces and noble mansions coexist with contemporary buildings, such as the Auditorium designed by the Brazilian architect Oscar Niemeyer. The view that you can enjoy from Villa Cimbrone Belvedere is really stunning and definitely one of the most famous in the world!

Scala, the oldest town of the Amalfi coast and birthplace of fra’ Gerardo Sasso, founder of the Knights of Malta, is surrounded by dense forests of chestnut trees. It still preserves its quite and relaxing atmosphere that perfectly harmonizes itself with the rich historical monuments, revealing the wealth of the population during the Middle Ages, mainly composed of noble merchants. The ruins of the Basilica of Sant’Eustachio, the largest church in the Duchy of Amalfi, is situated in panoramic position overlooking the village of Pontone and still shows the beautiful inlay work on the exterior side of the apses, frescoes and precious marble.

Tramonti, hilly town of the Amalfi coast, surrounded by the green and lush vegetation of the Lattari Mounts, consisting in chestnut trees and vineyards producing full-bodied wines (tintore wine), is the perfect place to enjoy the authentic flavors of local cuisine, in particular dairy products, bread and pizza prepared since the Middle Ages in rural ovens using rye, millet and barley flour, seasoned with lard and spices.

Vietri sul mare is the first town of the Amalfi coast coming from Salerno and worldwide famous for the production of bright colored artistic ceramic, documented since the XV century. In this town harmoniously coexist noble buildings with its richly decorated facades and the picturesque hilly villages of Raito and Albori where you can still enjoy an antique flavor atmosphere, the organic architecture of the Solimene ceramic Fabric by Paolo Soleri and the Neoclassical style Villa Guariglia, whose Belvedere Tower houses the Provincial Museum of ceramic.

We are dedicated to organize Amalfi Coast Private Tours for individuals, couples, families and groups.